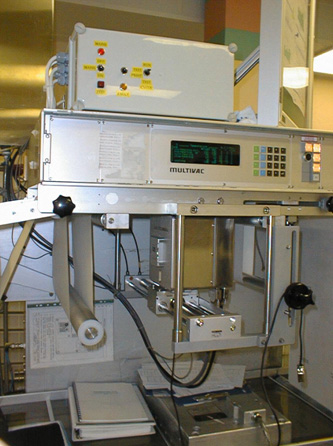 Pak Automation Ltd were commissioned by a multinational medical device company in the North West to provide an overprinting solution as a replacement for existing Inkjet printers.

The specification required us to print directly onto the Tyvek material of a R7000 thermoformer which is a two lane machine.

An Open Date Thermal printer was used because of its high resolution 300dpi print head and mounted in a specially designed framework inside the existing web path of the Multivac.

The printer was mounted onto an SMC rodless cylinder which moves the printer between the two lanes ensuring that both lanes are printed in their respective target areas during the stationery part of the cycle. A Mitsubishi PLC was used to control the print signals and interface to the cylinder and the Multivac. Following from this success a second line was retrofitted with an Open Date printer, this time it was a three lane application on a Multivac R530.