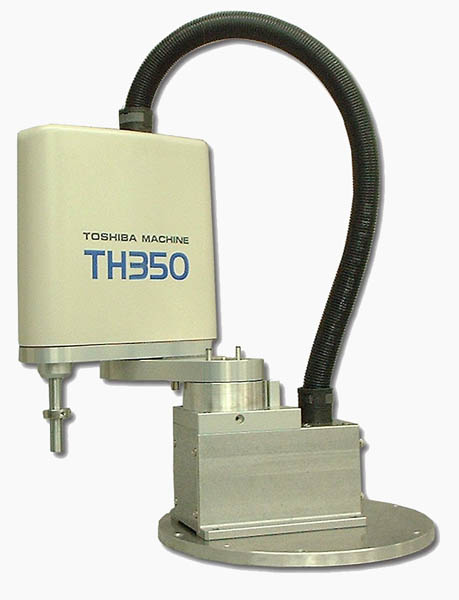 Integrating robotics into electronics applications is amongst the most rewarding tasks that we face at TM Robotics. Toshiba Machine’s fast, accurate and high repeatability robots are ideal for tasks such as PCB manufacture, mobile phone assembly and hard disc production as well as other pick and place functions in electronics applications. Normally, the reason our electronics industry customers give for automating is a desire to bring down costs and compete with cheaper manufacturing economies. They are looking for the future of manufacturing in the electronics industry.

For instance, Toshiba Machine’s TH350 SCARA (Selectively Compliant Articulated Robot Arm) was the logical choice when an Irish manufacturer of MCBs (Miniature Circuit Breakers) needed to replace an existing pneumatic pick and place machine. After changes to the manufacturing process, the existing equipment was not able to perform the required task in the necessary cycle time.

With the help of a local TM Robotics’ system integrator PAK Automation, the TH350 was installed and now easily meets its targets.

There were two principal reasons why the TH350 was chosen. Firstly, the production line manufactures MCBs at a rate of 24 a minute, so exceptional repeatable accuracy was required for this high-speed assembly task.  The TH350 is both fast and accurate – it offers repeatability and positioning to ±0.01mm and a completion time of 2.9m/s.

Size was the second important factor. The TH350 was ideal, as it is both compact and powerful, offering a 3kg maximum payload.  With an arm length of 350mm and minimal footprint and head clearance, the robot’s compact design allowed the engineers to locate it inside one of the workstations on an existing automatic assembly machine. Furthermore, the TH350 is extremely flexible and offers movement of ±115º and ±145º on axes one and two respectively. The installation created very little downtime; all it took was a long weekend during which the robot was interfaced, through the robot controller, to the existing line equipment.

Small, fast and easy robots for the electronics industry
This is just one example of the way Toshiba Machine and TM Robotics have responded to fears over the ease of use of industrial robots by making our own machines ever simpler to use, install and program. We have also proactively addressed the overall needs of electronics manufacture by producing smaller, more accurate and faster robots, such as our TH180, TH250T and TH350T SCARAs. We have also taken measures such as the introduction of clean room options, essential for high level electronics work, and ceiling mount models, saving valuable floor space on the production line. We have lived by the motto, smaller, faster and easier.

A literal manifestation of this maxim is the TM Robotics-developed portable SCARA starter pack. The pack can be set up in under fifteen minutes and is sufficiently easy to use that a technician will be able to write and run a programme after only an hour of tuition. It contains a TH180 mini SCARA robot, which features an arm length of 180mm, a payload of 2kg and repeatability of ±0.01mm. The robot is ideal for use in cleanroom work or electronics manufacture and as a display tool acts as a representative of the entire Toshiba Machine range. Also included is a TS1000 controller, which offers four axis simultaneous control, absolute encoders and can be programmed in SCOL, a language similar to BASIC. The unit comes complete with a teach pendant, for easy control access, and either pneumatic or electric grippers and a number of safety cubes for use in sample applications. The entire starter pack and the specially designed work cell can fit inside two carry cases, making it extremely portable.  We see the starter pack as the perfect antidote to the belief that industrial robots need to be complicated.

Easy to install automation for the electronics industry
It may well be that the best answer the European electronics industry can give to the cheaper labour costs offered in other parts of the world is this kind of easy to install automation. Not long ago I visited a factory which, as I first approached and spotted its blacked out windows, I thought was unoccupied. Thinking that what I was looking at was another empty plant; dismantled thanks to uncompetitive labour costs, I was surprised to realise that the plant was completely automated, with no human operatives at all. It occurred to me that I was looking at the most profitable future for the UK electronics industry.