“Falling robot prices – together with increased labour costs and rapidly improving technology – are major driving forces behind increasing investment in industrial robotics. This, along with the possibility of a Return-on- Investment sometimes as short as one year, proves that this technology needs to be embraced.”

Automation & Robotics Irl is a division of Pak Automation Limited of Lucan, Co Dublin, and is a systems integrator for Kawasaki 6-axis Robots and Toshiba Scara Robots. 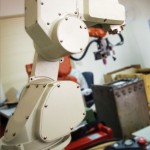 The first programmable robot was designed by George Devol in 1954. Devol went on to set up the Unimation organisation, from whom General Motors purchased the first industrial robot in 1962. At this time robots were hydraulic, as it was not until around 1977 that the electric powered industrial robot would surface.

Globally the automotive sector still accounts for a large portion of robot application. There are currently in excess of 760,000 robots in operation worldwide, with approximately 47% of these in Japan. However, with the lack of investment and the decline in the automotive sector in recent years, robot manufacturers are increasingly looking to non-automotive applications.

Advances in power electronics technology have been rapid. This has enabled industrial robots to become more reliable, while enormously increasing performance. At the same time prices for robots have been plummeting.

Every year industrial robots are increasing in speed, accuracy and dexterity of movement, while providing ever greater reach and payload. Controls and
programming languages have become more user-friendly, further enhancing the application possibilities for industry.

Falling or stable robot prices together with increased labour costs and continuously improving technology are major driving forces behind continued investment in industrial robotics. Add to that the possibility of a Return-on-Investment (ROI) sometimes as short as one year proves that this technology needs to be embraced. Companies like Automation & Robotics Irl specialise in bespoke projects where the robot is the core of an automation solution. In such applications, with the integration of industrial robot technology, Return-on-Investment, or payback, very quickly becomes evident.

The modern multi-axis articulated robot is an all-electric machine, utilising AC brushless braked servo motors with precise gearboxes and encoders for positional feedback. These robots are very fast and are repeatably accurate in their positioning, nominally better than 0.5mm. With a 6-axis robot you gain the dexterity of the unique “wrist action”, which greatly adds to the different robot postures and possibilities.

Robots are now widely used in complex palletising and materials handling applications where historically there may have been a risk to operators from RSI or exposure to undue hazards. In palletising operations, where the robot is the core of the cell, most of the automation integration involves the pallet handling and the marshalling of the product to be palletised.

In order for a company to reap the benefits of robots they must have sufficient in-house technological know-how as well as a thorough comprehension of their production processes. Very often when selling the concept of automation utilising robots there is little discussion around the robot itself and its abilities, most of the focus being on the integration skills being deployed in the particular application. For example there is little point in having a high speed, high accuracy robot when you do not have the same control over the rest of the components of the automation cell.

Robots in industry are now being branded ‘flexible automation’ because as well as the other benefits we have indicated robots can be re-deployed, say when a line needs to be altered because of product changes or reconfigured to handle a new process or product. As long as the robot has the reach and payload capacity to suit the new configuration usually it can perform new tasks through re-programming and minimal re-tooling in contrast to traditional automation methods.

The average life expectancy of most industrial robots is 12-15 years. Therefore, when examining the capital expenditure involved, it is always worthwhile considering the benefits that redeployment of the technology can provide.

Industrial robots work in all manner of conditions and are not affected by smoke, heat or chemicals. The repetitive tasks they carry out are predefined and the conditions surrounding the robot cell are also all predetermined. Most automation solutions are what we call ‘on demand systems’, in other words they will happily operate in standby mode waiting for product to arrive to the cell or, alternatively, await a signal from upstream or downstream equipment.

Concerns have often been raised in the past as to the threat posed to employment by robots. Undoubtedly, certain jobs are under threat by this technology – but they are categorised by “that job” as distinct from “a job” where, as already pointed out, the conditions involved are not suitable for an operator or involve Health and Safety issues.

To give an appreciation of the size and scale of articulated (6-axis) robots: a large robot could have a payload capacity of 500Kgs and a reach of 3.0 metres, its envelope of operation would extend 320 degrees around its joint 1 (base) and it would have the ability to reach below and behind itself. The payload referred to is a gross payload and would include the weight of the gripper or actuator fitted to that robot – so for example a robot with a 130Kg payload and an end-of-arm (EOA) assembly or tool of 60Kg, this would leave a maximum of product payload of 70Kg.

Many flexible automation solutions require more reach than payload, as the automation cell can be multitasking and the robot’s end-of-arm assembly can also be a multitasking device. In palletising operations the EOA assembly obviously is tooled to pick up the product being palletised, however in addition to this it may for example be necessary for the robot to place a layer sheet on every second layer and so the correctly designed EOA assembly gives this flexibility. The robot can also build multiple pallets at one time by marshalling the product to buffer/accumulation areas within the reach of the robot and then having pallets fed in around the robot so as to get more from the cell.

The quest for new applications

As with most technology-based products the advances in recent years have been dramatic. In the ten years between 1990 and 2000 the cost of robots has reduced by approximately 43%, the speed of the 6-axis machine has increased by 39%, the maximum reach has increased by 36% and the repetition accuracy has increased by 61%. The quest now is for new applications and new sectors which can benefit from robotics. The packaging industry in the last 3-5 years has been a good growth sector, with the medical device sector being the next big growth potential market.

Robots in the home

Household and domestic markets are viewed by some to be another big area for robot technology. However, the technology incorporated in your automatic vacuum cleaner or automatic lawn mower will differ greatly from the industrial robots we have discussed here; they will match the demand for consumer electronics and so will be gadget and cost driven.

In the meantime, industrial robots will continue to seek out new markets where they can eradicate tedious tasks carried out by reluctant and costly operatives, with estimates of a 26% increase in the number of robots in service by 2005 now being forecast.